This week just two treatments, slowly but surely we work towards the end.

My first treatment of the week

This time a less intense one because my skin is still very flaky.

Instead of that, Tanja is very satisfied with the way my skin reacts (doesn’t) and how my skin is improving, day by day.

Before Tanja starts with the treatment, she makes some “after” photos, the first ones!

A huge difference already in skin tone and texture, I’m so happy with it!

The next treatment will be Thursday, next week. A whole week without any treatment… 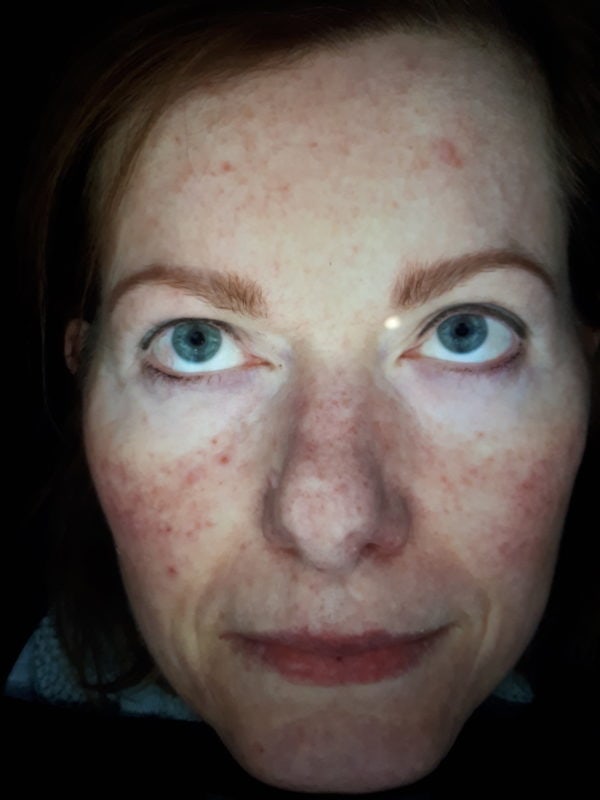 Before the first treatment

Between all my stories, I will tell you something about rosacea and demodex.

Those are two seperate issues! You can have them both (most people who suffer with rosacea are also suffering with the “bumps” of demodex) but not everybody has both of them.

“Rosacea is a common chronic relapsing inflammatory skin condition which mostly
affects the central face, with women being more affected than men.
The pathophysiology is not completely understood, but dysregulation of the immune system,
as well as changes in the nervous and the vascular system have been identified.
Microbes that are part of the normal skin flora, and specifically in the pilo-sebaceous unit – including Demodex mites and Staphylococcus epidermidis – may also play a role as triggers of rosacea.

Symptoms are initially transient.
This is followed by persistent erythema due to repeated vasodilation,
then telangiectasia and skin inflammation in the form of papules, pustules, lymphoedema and fibrosis.

Rosacea can seriously affect a patient’s quality of life.”

Rosacea = blushing, flushing (transient redness), heat, an uncomfortable warm feeling in your skin.
Rosacea is actually a vascular disorder.
Blood vessels in the skin suddenly become dilated. The blood flow increases, which results in flushing and redness of the skin.

Triggers can be: food, stress, alcohol, a disbalance in your gut and/or hormones, a lack of some (digestion-) enzymes, extreme temperatures (hot or cold), wind, excercise, an allergy, skincare, perfume, smoking (and not just by smoking yourself, staying in a smoky room can also cause some problems) ….
A long list! It’s important to find out which are your triggers.

Well; let’s start with the food because we need to feed ourselves every day, don’t we?

Most of us have chosen a healthy lifestyle, which include healthy food, recently or many years ago.

……or have even chosen a “Raw Food”-lifestyle”.

That sounds perfect, but for people with rosacea it isn’t always that perfect…. Unfortunately, a lot of this healthy food contains a lot of histamine!

But what is Histamine and what’s it’s Function?

Histamine is an organic nitrogen compound involved in local immune responses as well as regulating physiological function in the gut and acting as a neurotransmitter.
Histamine triggers the inflammatory response. As part of an immune response to foreign pathogens, histamine is produced by basophils and by mast cells found in nearby connective tissues.
Histamine increases the permeability of the capillaries to white blood cells and some proteins, to allow them to engage pathogens in the infected tissues.

Histamine is found in mast cells. It’s released to help fight infection/illness/injury, keep us awake, regulate our hormones, run our digestive system and as a neurotransmitter.
Some people have unstable mast cells that release too much of it, or they just have too many mast cells.
Some people have allergies which means they also have too much histamine at times.
Others have too little of the histamine lowering enzymes diamine oxidase (DAO).
An excess of histamine is involved in: allergies, histamine intolerance, mast cell activation, mastocytosis and a number of other medical conditions.

Other than being found in the body, histamine is also found in food!
Some foods contain it, while others trigger its release.
We know that already…

Ok… in simple words….
If and when your immune system reacts, forever what reason, certain cells release histamine. A very normal reaction of your immune system.
It reacts for a good reason:
It’s released to help fight infection, illness, an injury, keep us awake, regulate our hormones, run our digestive system and as a neurotransmitter. All very helpfull!
Things go wrong when we have too much of it or too little “breakdown helpers” we call enzymes….

Many people with rosacea and other skin complaints start eating consciously; Weekly a lot of fruit and vegetables and liters of tea are flushed through.
The health shop is happy with you (and me ;-)!
But there are quite a few vegetables, fruits and herbs that are full of histamine.
Tomatoes, spinach, avocado, mango, kiwi, strawberries and spices such as cinnamon and coriander are notorious sources of histamine.

And my favourite herb; nettles….

Your oh so healthy spinach, avocado and mango smoothie may be full of antioxidants, but with some little bad luck your skin problems will also get worse.

The list of histamine sources is a long one; hereby some examples:

Will all food products give you a flush? No, certainly not, it’s different for everybody.

But; it’s also very important how the foodproduct has been processed.
Of course, the amount is relevant, too!
A pinch of a herb doesn’t have the same effect as halve a plate of fish.
Keep in mind; the riper the product, the more histamine it might contain.

I know my skin reacts immediately after eating some citrus or after drinking a little bit of red wine.
So, you have to find out which products are your triggers.

I mean; you can probably drink 2 cups of coffee during the day, eat a few strawberries and a slice of avocado but the third cup of coffee gives you a flush.

That doesn’t mean the coffee was your trigger.
No, it means you have reached the total amount of histamine your body can handle.

Keep your own diary, it’s the best way to find out which are your triggers.

It started with some red spots, a warm feeling, “blushing” all the time and some strange pimples, it ended [...]

AFTER 1 WEEK… It was a heavy week. Heavy because the treatments are severe, it has to be done next [...]

Monday.. I look like a fish... Scales everywhere! All is according to plan,Tanja says to me, because this is exactly [...]

I write this blog post while I’m sitting in the sun on a beautiful, sunny Sunday. It’s spring! I’m sitting [...]

Fourth week This week just two treatments, slowly but surely we work towards the end. [...]

Tanja expects me on Thursday for a treatment but, before that, I’m allowed to clean my skin on Monday.  As [...]