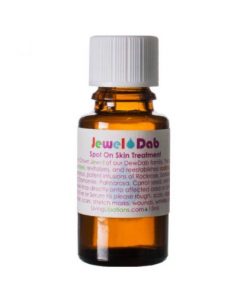 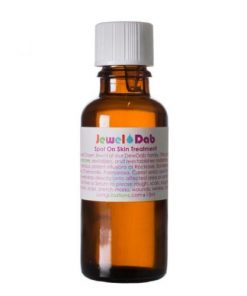 The Crown Jewel of our DewDab family is Living Libations Jewel Dab, a concentrated chrism created to restore, revitalize, and reestablish radiance.
Adorn a jewel-droplet directly onto skin, to quench lackluster complexions, to please rough skin and to soften the appearance of scars, stretch marks and relax redness.

Jewel Dab is created with these replenishing gems to tone the appearance of skin’s texture: RockRose for regeneration, Sandalwood to soothe dryness, Myrrh to minimize fines line, Immortelle to compel elasticity, Chamomile to caress puffiness, Palmarosa to placate redness, Carrot Seed to soften scars and Turmeric to even skin tone.

Simply tilt the bottle to release one drop onto your fingertip and apply directly to the affected area. A little dab will do! Use undiluted or as beautiful additive to the Rose Glows, Best Skin Evers or Soothsayer Serum.

Rockrose (Cistus landaniferus) – Replenishing Rockrose is neither a rock nor a rose; it is a Mediterranean wildflower that resembles wild roses. Rockrose’s affinity for skincare was recognized by ancient Egyptians who mixed it into beauty crèmes. It was a key ingredient in their unguents and ointments for skin imbalances due to its toning and rejuvenating nature. Dry, dull and listless skin will relish the oil’s tonifying and moisturizing properties.

Sandalwood (Santalum album) – Succulent Sandalwood is the perfect antidote for sun drenched skin that is hot and dehydrated. It helps the skin retain more moisture, reduces the appearance of scars and age spots, and purifies pores. Sandalwood is an ancient body and face oil beloved as a calming, soothing tonic. The honey-syrup-scented essence satiates dry, sensitive skin.

Myrrh (Commiphora myrrha) – Munificent Myrrh essence contains the same otherworldly aroma and healing properties that made it a favorite of so many ancient civilizations. Ancient Egyptians used myrrh oil to embalm and as a beauty unguent, detoxifying agent, and fragrant perfume. It was considered sacred in biblical times. They anointed alters with this potent sap as the epitome of purity. Myrrh has been used for over 3800 years as a powerful plant of restoration for skincare. With high levels of soothing sesquiterpenes, myrrh is an optimal oil for reducing the appearance scars, spots, melasma red, dry, dull, uneven skin. This opulent oleoresin is beautiful in sun bathing oils and glorious for glowing skin.

Immortelle (Helichrysum italicum) – Everlasting Immortelle is stellar and shines divine for all kinds of skincare. This fragrant-floral oil is wild-crafted on the island of Corsica where the flowers prosper with ocean breezes and sunshine. The flowers grow at an altitude of 4,000 feet on the rocky countryside cliffs. Immortelle aids in abating the appearance of scars, spots, melasma, redness and fine lines. This multifaceted gem of an oil is uplifting emotionally as well.

Chamomile (Anthemis nobilis) – Comforting Chamomile essential oil is steam-distilled from the delicate diminutive petals of French chamomile flowers. This flower, famed for its calming caress, is also known as Roman Chamomile. Its gentle grace was revered by the Ancient Egyptians, the Moors, and the Saxons as a sacred elixir worthy of the angels. This essence is rich in easing esters making it the gentlest go-to oil to sooth unruly skin.

Palmarosa (Cymbopogon martini) – Pleasant Palmarosa is distilled from a tropical, fragrant grass resulting in an aromatic oil that smells like a lemony-geranium-rose and is simply splendid for the nose! This formidable skin rejuvenator rich in mighty monoterpenols, emollient esters, loving linalool, and generous geraniols balances skin oils and purifies pores.

Turmeric (Curcuma longa) – Treasured Turmeric extract is a tonic of golden-goodness for skin. Through supercritical extraction, all of turmeric’s lipophilic (oil-loving) compounds are captured from the plant’s roots. This special extraction process captures much more of the aromatic volatile oils, lipids, and color than a typical powdered herb. Turmeric oil essence is rich in nutrients.