The Light of the Maiden – A Worker Bee’s Story

By the Bee Boys

”And though she be but little, she is fierce.”

“And though she be but little, she is fierce.”

A popular line from Shakespeare’s A Midsummer Night’s Dream, this could very easily be a beehive’s description of their worker bees, or maidens.

According to Wikipedia, a worker bee is any female bee lacking the complete reproductive capacity to function as the colony’s queen bee. But these honeybees have a function that is far more important than this “worker bee” definition implies!

The maiden bee keeps her hive healthy and functional by collecting pollen in her pollen basket and using the proboscis (her long tongue) to suck nectar out of flowers. She will also process and store pollen and nectar as food for the entire hive.

When she collects nectar and pollen, the maiden pollinates plants in the process. Considering that the honeybee is responsible for pollinating 71 of the 100 crops that supply 90 percent of most of the world’s food, the hive isn’t the only organism dependent on the maiden bee for food. By powering the force of pollination, these little ladies feed our world in the process!

A Labor of Love

Composing 90 percent or more of the beehive’s year-round population, maidens have many crucial roles from the day they are born, all of which ensure that the hive is fully functional.

After 21 days in a honeycomb cell, a maiden honeybee is born. Weighing in at about 100 milligrams and only 15 millimeters long, the maiden bee turns to assist the nurse bees with the brood cells moments after emerging from her own. She helps with cleaning and caring for the other brood cells in the colony’s nursery, nurturing and feeding the bee larvae (babies).

Within a few days, the maiden takes on the role of nurse bee herself, feeding the baby bees her glandular secretions of royal jelly for about 3 days to protect the larvae from bacterial infections. After that, she will wean them off the royal jelly and feed them bee bread, which is composed of pollen mixed with small pieces of honey, beeswax, and bees’ digestive enzyme. The maiden honeybee also inoculates young bees with immune-boosting intestinal flora.

In between bringing in water when needed, and making and capping honey, the maiden bee is busy building comb, which is an important natural expression of honeybees that Bee Boys encourages through our apiary style. Not only does she use her hypopharyngeal gland (found in her head) to feed larvae, but the maiden eventually uses it to feed the queen and drones as well.

To say that the maiden bees work is a labor of love is no exaggeration. Maiden bees are so devoted to their hive that they have been known to perish if separated overnight from their family (or “ohana” as we say in Hawai’i). 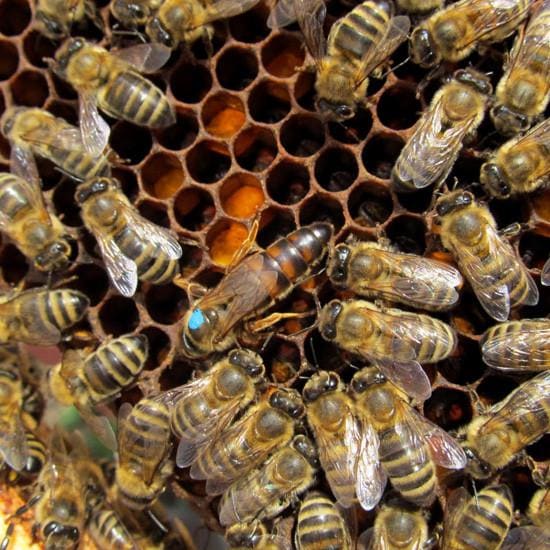 Mature maidens have the illustrious job of feeding and caring for the honeybee queen. As the queen’s maidens, the worker bees spread the essential Queen Mandibular Pheromone (QMP), which is given off by the queen. After encountering their queen bee, the attendants spread QMP throughout the beehive. The pheromone acts as an assurance to the rest of the hive’s bees that their queen (who is not always visible) is alive and well.

The queen’s maidens assist in preparing for swarming as well, which is the colony’s way of ensuring species survival. When a hive swarms, an older queen will leave with about half of the maidens from the original beehive. This swarm will move to a new location and build their permanent hive there. As an integral part of the hive’s cooperative culture, the maiden bees maintain a communication network with the drones and queens within that hive.

If the queen becomes unwell or dies, the maidens can even lay eggs to perpetuate the hive until a suitable queen is found!

Maiden bees also assist the drones in maintaining an ideal temperature for keeping the hive’s brood chambers (the colony’s maternity ward) warm year-round. They protect the beehive by creating propolis and using it to seal the smallest gap or repair drafty cracks in the honeycomb.

The maiden maintains a healthy air quality within the hive by routinely removing dead honeybees or larvae that did not grow, cleaning the live bees, and cleaning the hive itself. And though she be but little, she will fiercely defend her hive, protecting it from diseases, intruders, and pests.

To defend her hive from any intruder, a maiden bee uses her stinger. And if she stings something with thick skin, like a human, it will cost the maiden her life. As the fair maiden attempts to pull the stinger out, it causes a massive abdominal rupture that is fatal.

“They work themselves to the full expenditure of their capacity and die with tattered wings, after thousands of trips to tens of thousands of flowers.”

The Light of the Little Maiden

With the little maiden effectively performing all these tasks, the hive thrives. And though she be but little, she is a fierce defender, skilled builder, and devoted caregiver.

“We, the maidens, are the messengers of light. Our tasks are more than the work at hand. Though we look small, each fills our role, and thus bee, hive, kingdom, and phyla, and the world move forward together… We beings of light ask you to know that we are all connected.” Jacqueline Freeman

Understanding this has never been more important! The little maiden bee shines a light on this connection. She reminds us of our undeniable impact on our fellow man, on the honeybees, on nature, and on our planet … And inspires us to choose to make it a positive, meaningful one!

More about the Bee Boys