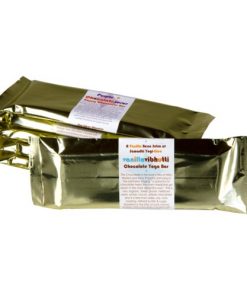 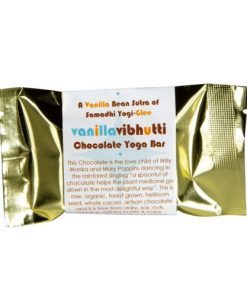 Taste: A cinnamon and triple vanilla bean dream, sure to rejuvenate your prana.

The Creation Story Behind the Bar

Climbing into the belly of a smile, Nadine and Ron found themselves painting strings of stars on the Roof of the World. The auroral hour was upon them; light and night were mating, filling the atmosphere with song.

Ciphering the musical-messages of this electric air, Nadine and Ron followed the notes to a hidden lair. It was the rock of this cave, where many a Sadhu’s drishti gazed upon the cosmic-nave, that they set a meteor-metate to pestle a paste of sunoti-sap. Sandalwood beads, cinnamon malas, arrow-branches of taheebo, berry of camu, criollo cacao and the inner seed-ashram of vanilla’s moccasin bean on the mixing-stone were laid. They played and played until nectar was made.

While moonbeams and stardust still shone on the saffron-streaks of dawn, they gathered the mixed amrita-crème to sow around the globe’s ground. Across the earth’s mantle they planted seed-syllables of yum. Like this.

With hands full of dirt, up curled ananda-asanas to the sun: benedictions of bliss unfurled orisons of praise to meet horizon’s blaze. Amazed each moment, they find what they need. Like this. Rays of the sun split the ode of each seed-bead. Then out of the soil bewildered in love, sprouted a tree of Samadhi-glee entwined with vanilla’s inflorescence vine. This unity sent forth invitations: vast intricate strands of trumpet telegrams dripped from the jubilant-jewels of orchid’s throat. Open secrets of this flower adornments sutra was yearning to commune that midnight’s moon is the dance of high noon. Vanilla’s aerial-roots tapped into the invisible ethers and Nadine and Ron received a darshan to dash duality’s grasp. Now imbued with the lyric of laughter, they felt it was the deep-down shadows of the giggle-grotto that joined the juice of joy up to the crown.

Unspoken words. Silent-soma soars in and out. Like this.

Maca root (Lepidium meyenii) – Enjoyed in Peru as a tasty addition to food and drink, this root adds a sparkle to the eye, boosts energy and juiciness, ignites lovers, and sparks desire.

H. Seeds – H. seeds lend a lovely dose of essential fatty acids and a nutty taste similar to piñons to the chocolate.

Camu camu berries (Myrciaria dubia) – are another wonder from the Amazon, and the residents eat these gigantic berries as a juicy treat that taste a little like sour cherries. The highly nutritious fruit imparts zip and zing for improved energy and a balanced demeanor.

Purple maize (Zea mays L.) – Purple maize is another Amazonian treat with a mildly nutty-sweet taste. It is abundant in purple anthocyanin antioxidants.

Pau d’arco (Tabebuia impetiginosa) – Indigenous peoples call the pau d’arco tree tajy, which translates as “to have strength and vigor.” They steep the bark as a tea and sip it to boost energy. There is 2,363 mg (0.083oz) of pau d’arco per 4oz chocolate bar.

Raw honey – Raw honey is an ambrosial blessing created by the grand design of glorious honey bees. All natural wildflower honey is the bee’s knees for natural sweetness.

Show only reviews in English (7) 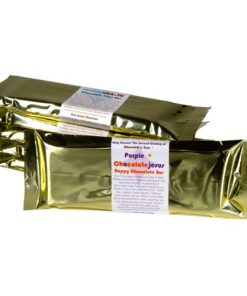 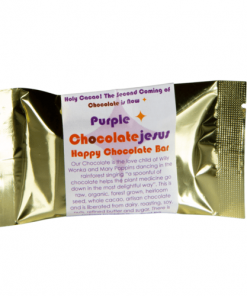 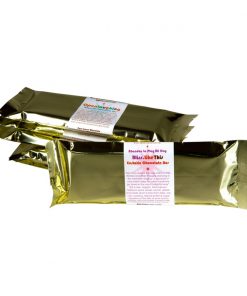 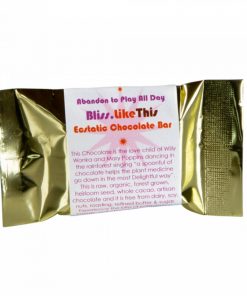